Early in April Ken Livingstone was suspended for a further 12 months by the Labour Party National Compliance Committee.

He was originally charged with anti-Semitism and ‘holocaust revision’, either of which would have been reason to expel him if true. Neither accusation would stand up in a court of law, so it was no surprise when the Compliance Committee settled on “conduct prejudicial and/or grossly detrimental to the Labour Party”, citing “deeply offensive” statements on Nazi Germany.

Unfortunately, to their shame, Jeremy Corbyn and John McDonnell also attacked him, and with Len McCluskey’s support the case was referred back to Labour’s National Executive Committee. But upholding freedom of expression, and solidarity with Palestine, means defending the right to speak truthfully about history, even if it hurts.

Why all this uproar about one man, whose strong record of fighting racism for decades is unquestionable?

It is clear what Ken Livingstone did Not say. He did not say that Hitler was a Zionist, nor that Zionism is equivalent to Nazism nor that the German Zionists, a small minority of German Jews in 1933 when Hitler took power, were complicit in the Holocaust. He did say that Zionist organisations collaborated with the Nazi regime which promoted them in opposition to the vast majority of German Jews who regarded themselves first and foremost as German citizens, not Jews. They wished to integrate into German society. The aim of Zionist Jewish organisations, on the other hand, was to persuade Jews to emigrate to Palestine.

The Nazi regime aimed to make Germany a Jew-free country. New laws gradually excluded German Jews from cultural, social, political and economic life. Some were supported by the Zionist organisations, as contributing to their aim.

On September 17th 1935, the paper of the German Zionist Federation Welcomed the Nuremburg Laws which removed German citizenship from Jews and effectively made them stateless. These laws were opposed by the vast majority of German Jews.

The regime promoted emigration from Germany and saw Zionist organisations as part of the process. This conclusion is detailed by such eminent Zionist historians as Lucy Dawidowicz (War Against the Jews), David Cesarani (Final Solution and The Fate of the Jews 1933 – 1949 ) and Francis Nicosia.

“Throughout the 1930s … there was almost unanimous support in German government and Nazi party circles for promoting Zionism among German Jews and Jewish emigration from Germany to Palestine.”

From Zionism and Anti-Semitism in Nazi Germany by Francis Nicosia, Professor of History and Raul Hilberg Distinguished Professor of Holocaust Studies at the University of Vermont.

The most notorious collaboration was the Ha’avara Agreement, originally proposed by a Jewish businessman in Palestine, and embraced by the Nazis as a means to puncture the world-wide campaign for a boycott of Hitler’s Germany. 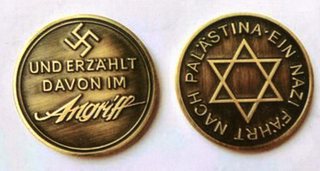 The Agreement was signed in August 1933 by the Zionist Federation of Germany, the Anglo-Palestine Bank, and the economic authorities of Nazi Germany.

The owner of a Tel Aviv citrus export firm, Sam Cohen, had proposed that Zionist emigres avoid tax on capital leaving Germany, by purchasing goods in Germany to be sold in Palestine. The German Consul in Jerusalem wrote “In this way it might be possible to wage a successful campaign against the Jewish boycott of Germany… It is important to break the boycott first and foremost in Palestine, and the effect will inevitably be felt on the main front, in the United States.” The Nazis first agreed for 1m Reichmarks to be shipped to Palestine as farm machinery. The Jewish National Fund then got Cohen to arrange for frozen JNF monies to be released for transfer. “The bait for the Nazis was that the cash was needed to buy land for the Jews whom Hitler would be pushing out. Cohen also assured that he would operate behind the scenes at a forthcoming Jewish conference in London to weaken or defeat any boycott resolution.” In early May 1933, Chaim Arlosoroff, the Political Secretary of the Jewish Agency, came to a preliminary understanding to extend Cohen’s arrangement. He returned to Tel Aviv and was assassinated because of his dealings with the Nazis. The Agreement was then signed, and caused an uproar when it emerged.

What’s behind the attack on Livingstone?

We reject the view that Ken Livingstone is anti- Semitic. His statements on collaboration of German Zionists with the Nazi regime are broadly accurate. He has a long history of supporting the Palestinian struggle for freedom and justice, as does Jeremy Corbyn who has faced continuing opposition from Zionists within and without the Labour Party who want to silence the voices of Palestinians and their supporters. Corbyn’s victory on an anti-austerity, socialist platform also angered right-wing Labour members, MPs and the media. Research by the Media Reform Coalition concludes that “most newspapers [had been] systematically vilifying the leader of the biggest opposition party, assassinating his character, ridiculing his personality and delegitimising his ideas and politics.” After his election as leader this alliance of Zionists and neo- liberals intensified their opposition, but their coup attempts failed to remove Corbyn.

False accusations of anti-Semitism were then deployed. The independent inquiry by Shami Chakrabarti, which found that “The Labour Party is not overrun by anti- Semitism or other forms of racism”, had no effect. The false accusations by supporters of Apartheid Israel continued, with some newspapers, in particular the ‘liberal’ Guardian acting as cheerleaders. In this context we defend Ken Livingstone and condemn Zionists and their supporters for personal abuse and blatant political misrepresentations. Ken Livingstone was vilified for this statement:

“When Hitler won his election in 1932, his policy then was that Jews should be moved to Israel. He was supporting Zionism before he went mad and ended up killing six million Jews.”

This statement is not anti-Semitic. Yes, it should have said 1933 and Palestine. But the Nazis, under Hitler’s absolute authority, did support the Zionist emigration policy and did explicitly favour German Zionist organisations. Criticism of Israel and of its founding ideology, Zionism, has been misrepresented as anti-Semitic. Anti-Semitism is a form of racist bigotry directed at Jews because they are Jews. By contrast, anti-Zionism opposes the political ideology which underpins the Israeli state. More than 40% of British Jews do not identify as Zionist. These escalating allegations of anti-Semitism are a response to the growing success of the Boycott, Divestment and Sanctions (BDS) movement in holding Israel to account for its crimes against the Palestinian people. Allegations of anti-Semitism have been used increasingly to discredit Israel’s critics. The intention is to suppress criticism of Israel and undermine freedom of speech for Palestinians and their supporters.

Accusing Ken Livingstone of “deeply offensive” statements which are historically correct is outrageous.

Discussing the actual history will offend some who see it as undermining the legitimacy of the Zionist project of creating a Jewish state based on the ethnic cleansing of Palestinians. In another era the white leaders and supporters of Apartheid South Africa were ‘offended’ by criticism of apartheid.

The answer is simple. Stop supporting Apartheid Israel and the Zionist philosophy which underpins it.