The Palestinians were NEVER going to force a vote for SUSPENSION of Israel.   They made it clear that the outset that they “believe Israel deserve expulsion”  but they were making a massive concession (suspension call) to Israel hoping that the Israelis would reciprocate.      This is a repeat of the Palestinian Football Association approach at the FIFA Congress last year in Brazil.    It got their message to millions across the world.  Mission accomplished.

Everyone in the anti apartheid movement during the 1970s knows how Sir Stanley Rous frustrated the Anti Apartheid movement for years by his use of the “SUSPENSION CARD”  and how he lied to the FIFA Congress to prevent the EXPULSION of SA in 1964.    That is why FIFA had to kick him out before it finally EXPELLED Apartheid South Africa 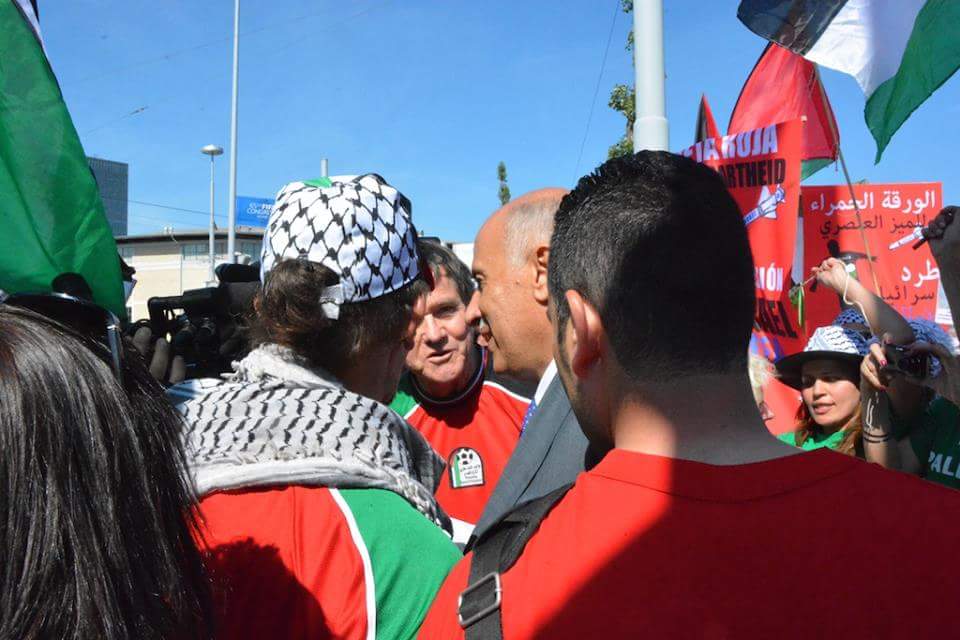 The withdrawal of the Palestinian motion was NOT a defeat for Palestine (as some people claim) or the campaign to EXPEL apartheid Israel from FIFA,  as Football Against Apartheid are working with our international colleagues to have a motion for The EXPULSION of Apartheid Israel agreed by FIFA at a future Congress.      The Palestinian Football Association achieved exactly what it wanted i.e.  Maximum publicity for its position, and the exposure to the world-wide football family of the unwillingness of Israel to make the necessary concessions in response.      The Palestinians like the South Africans before them have shown the world of football that EXPULSION is the only solution,  that the international partners of Palestinian football will table the resolution to EXPEL apartheid Israel at a future FIFA Congress.

It is sad to note that whilst apartheid South Africa was expelled following the massacre in Soweto of nearly 200 protesting school children,   and  Zimbabwe was EXPELLED from FIFA on 12 March 2015 for non payment of a debt of $60.000 to its former coach, that it could be considered right and just to seek the mere suspension from FIFA of an apartheid nation responsible for its most recent massacre of 547 children asleep in their beds in July 2014.

Arrests of FIFA officials at Congress 2015
The doors are beginning to open on this charade too.   UEFA President Platini could find himself at the centre of the controversy yet, as he is on record of campaigning for Qatar for the 2022 World Cup finals against the USA.   There are reports that Platini has expressed concern that CONCACAF (of which USA is a member) and UEFA are losing influence because of the growing power of Africa & Asia.      The arrests were ALL in connection with CONCACAF business advertising, with the exception of the Qatar 2022 vote (Where USA lost) and the Moscow 2018 (where England lost)  and arrests could have been made in years if not months leading up to Congress.

The decision to interrupt the FIFA congress was probably made by USA following the Israeli response to the Palestinian FA decision in April 2015 to submit its motion to FIFA congress.  USA appear to have timed its intervention to put the focus of the FIFA congress on corruption in FIFA, even though the allegations appear to refer to issues of corruption involving only USA and Brazil.   (It was reported that the Israeli government instructed 100 embassies to mobilise to combat the threat).   Not exactly the same issue but the same impact as the  “Shock Doctrine” as identified by Naomi Klein.

I suspect Apartheid Israel will soon start to implement the methods of apartheid South Africa as they become more and more desperate to silence the anti apartheid movement as our campaign increases its scope and impact.

This is the video we made on 28 May in Zurich

Larry Derfner is an Israeli journalist and copy editor at Haaretz. An awakening among liberal Zionists has begun in recent weeks. Some influential voices in this camp, mainly overseas... Read More

By Batya Ungar-Sargon, The Forward, February 13, 2018 George Duffield Ever since the late 1960s, Israel has been a defining feature of American Jewish identity. But for the first... Read More